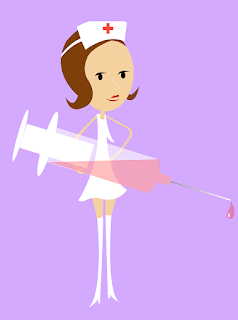 Before I talk about diabetes (more precisely the gestational variety) I have to have a huge moan about the Thai Healthcare system AGAIN! Sometimes I think they are purely in this business for the money, I mean purely, no Hippocratic oath, no caring for the patients, no ethics, just plain wealth and extortion!


I have lost count of the number of times I have been tested for HIV and Syphilis in Thailand, I mean, seriously lost count. To the point that I forcibly told my doctor that I did not want any most tests for this. I perceive my risk of having contracted either disease in the last few weeks as very minimal as I only have one sexual partner, and as she has prescribed vaginal suppositories for progesterone I haven’t even been able to have unprotected sex with him!, so seriously….how do you think I have suddenly and spontaneously caught HIV and/or Syphilis in the last few weeks?!

So I thought I had made myself clear, well apparently not. Having just spoken to the nurse at Bumrungrad hospital to check on my next appointment I find I have been routinely scheduled for yet another HIV and Syphilis test at a cost of THB2,000. When I told her that I didn’t want the tests she persisted to tell me that Dr. Somsri had recommended them. “NO NO NO please cancel”.

I can only assume it is for the money that they keep doing this, that they keep scheduling tests without explaining, and seeking your informed consent to them. They are simply a surprise when you get to the cashier, at no point do you get told what each vile of blood is for.

So please ladies, please remember to clearly and unequivocally ask your Doctor’s what they are testing for and why, please ensure that you are empowered with enough information to make a decision about what your Doctor is doing to you and your baby and what they are prescribing.

Moan over for now, back to testing for Gestational Diabetes in Thailand.

At my last appointment I was told that I should have a test for Gestational Diabetes. It was explained to me that I would need to fast before I attended the hospital in the morning, then I would drink a solution and have my blood sugar levels tested as an indication of whether or not I had gestational diabetes. Looking back I really should have learnt to ask more questions by now, but yet again I walked out of the doctors office with a new appointment slip and little information about what I had agreed to.

I later spoke with friends and a NHS trained midwife. She informed me that these tests are more typically needed in Asian and Middle East populations and people with family history of diabetes or high BMI. My friends helpfully added that the test wasn’t too bad (if I needed it) and that it only cost around THB800. After a quick check around the room people started telling me that they thought Bumrungrad would charge me multiples of this, so I decided to investigate this further.

Having spoken with the nurse at Bumrungrad I believe I have been scheduled for the 50g oral glucose tolerance test (OGTT), and the cost will be THB1,500, so whilst it is more than another clinic at least it isn’t thousands more.

But DO I NEED THE TEST?

Any woman can develop gestational diabetes during pregnancy, but you're at an increased risk if:


If any of these apply to you, you should be offered screening for gestational diabetes during your pregnancy.

According to the NHS I was not at an increased risk, but what was the consequence of failing to take the test and subsequently finding out that I did have gestational diabetes?

Running through this in my mind I already know from the ultrasounds that we are predicted a big baby and I want to do everything I can to promote a uncomplicated natural birth. I also know that in Thailand they are likely to do everything they can to try to convince me to have either an induced labour or an elective caesarean section.

Doing a some further research I found a great resource at PubMed which comprises of more than 26 million citations for biomedical literature from MEDLINE, life science journals, and online books. Whilst this is a very techy website the summaries contained in the Abstract version can be helpful:

BACKGROUND:It is common practice to routinely screen pregnant women for gestational diabetes. The screening technique typically used is the 1-hour 50-g oral glucose tolerance test (OGTT), with a subsequent 3-hour 100-g OGTT for women whose 1-hour test was positive. This process can be both time-consuming and inconvenient for patients. Additionally, its sensitivity and specificity are estimated to be 70% and 87% respectively, and data about the effect of screening and treatment on low-risk pregnancy outcomes are limited. The objective of this study was to reassess the value of routine screening of all pregnant patients with a 1-hour glucose challenge test.

METHODS:At a university-based family practice center with a predominantly low-risk population, a retrospective analysis was performed of all patients (n = 595) who received prenatal care and gave birth between January 1988 and December 1993. Among women in whom gestational diabetes was diagnosed on the basis of glucose tolerance testing, we identified those with risk factors for the disease, and examined whether a selective screening program based on risk factors alone would have resulted in correct diagnoses of gestational diabetes.

Make sure your Doctor schedules you an early morning test with a follow up appointment on the same day at around midday or later.

2. Register at the Women's clinic early the next morning

4. Have a catheter fitted in one hand

9. See doctor (note that results can take 90 mins to come through)

The drink tastes ok, the lab technicians are normally 'ok' at taking blood (although not the best), you may feel a little dizzy and sick, you will feel very hungry...but all in all it's not too bad! 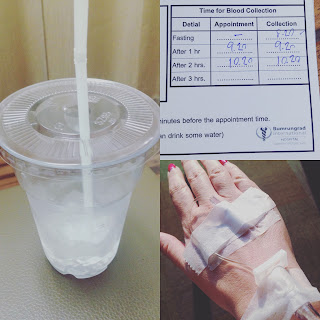 I killed some time chilling in the 6th floor roof garden 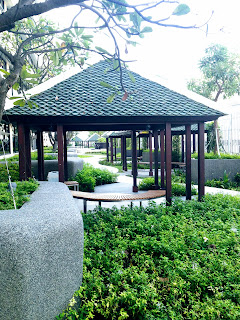 Get informed, give true consent!
Posted by Rouge at 01:30