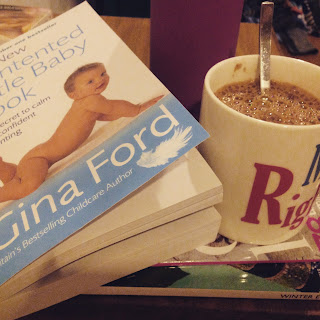 After a particularly bad long haul flight I was recently suffering from jet lag and innocently posted the above photo on Facebook - a mug of hot chocolate and the book I was reading at the time. I was reading Gina Ford.


Now, let’s be honest we all know that we often post photos with the sole intention of sparking conversation, even controversy. I can honestly say that this was not one of those times, my jetlag was so bad that my actions were not really conscious, I wasn’t asking for advice, I wasn’t reaching out for help, the most I may have been thinking was that if any of my friends in the UK saw my post they would realize I was awake for a whatsapps chat…nothing more than that.

But what unraveled in front of my blurry eyes was quite amazing…other mums literally came out of the wood work to not only give their opinion of my chosen non fiction reading material but also imparted so much emotion, I had clearly opened up a genie’s lamp, and not everyone liked Gina Ford’s genie.

I choose to run with it (listen and try to learn), after all I’ve been through the first trimester stuff and I’m plugging my way through the second trimester stuff, the third trimester is looming (and I know that will mostly be about sitting in the air con), BUT what about the fourth trimester? What happens when I come home, with a living, breathing, screaming, crying baby. How do I settle this pure, little thing into our crazy household, how do I manage to be the best mother, whilst being the best wife, best friend and best me?

Where could I turn? Friends of course, and here they were spontaneously giving me book reviews and advice about parenting, so I posted a polite thank you and sat back and watched it unravel, as my various friends debated the best and worst of baby books out there:

“Eeekkk…that is one scary book! She is quite strict on routine very stressful for mummy’s, my advise…go with the flow”

“Oh this book made me feel like a rubbish mum”

“Too strict didn’t work for us…chill and go with the flow. Some books can make you feel rubbish if you’re not doing stuff exactly as they advise…”

I was a bit shocked that so many friends had been so quick to judge my choice of reading. I understand that they may have been aware of this book, maybe even tried it out and had decided, rightly for them, that it wouldn’t work. But I was also struck by the reason’s they gave for rejecting Gina Ford’s method. They did not seem to be saying that it didn’t work for their baby, but that it didn’t work for them, that it made ‘them’ feel bad.

But for me, in my innocence at the moment, I am already struck and overwhelmed by the responsibility of being ‘the adult’, and the importance of imparting all of my wisdom and skills on creating the best mini human being I can. I don’t remember my mum ever not doing something to help me because “it made her feel rubbish”, quite the opposite, she was the adult, I was the child and I learnt from her, I wasn’t left to decide when to eat, sleep, go to school or do my homework and I assume, innocently, that this acceptance of our respective roles had been learnt from an early age, possibly even birth.

I had also had the unusual experience of being fairly hands on with a friends baby in the early days, thanks to a douchbag husband that decided to leave her high and dry when their son was just 3 months old. I’ve never seen such terror in someone’s eyes, but she was filled with fire, filled with loathing, filled with love for her son and filled with determination. So we got right down to it, the business of recreating her world into a super kick arse single mum world, with a super kick arse son.

We set ourselves the mission and we moved pretty quickly. The practicalities of suddenly, and unpredictably, being a single mum, like finances and budgeting, meant that she would need to go back to work when her son was 6 months old, and she would have to rely heavily on day care, so this baby needed to learn quickly that he had a role to fill in the family dynamic and it needed to be a calm, positive force in the house, and most importantly she (and he) needed a routine…otherwise life was simply going to break her.

So she turned to the books…and she stumbled across Gina Ford’s “The Contented Little Baby Book”. Gina Ford seems to have gotten herself a reputation of being cruel and over strict, mostly due to a (mis)perception that she promotes “crying it out”.

BUT, my friend was fired up with a desperate need to establish a routine and quickly, she needed tips on how to parent in ways that enabled her to have a life, support her son, manage her finances and bring him up in the most positive way possible. There was no giving up, no time to go with the flow and it was too big a gamble to “wing it”.

She chose to take the most important bits out of the book, and not get obsessed with Gina’s tone (which can we rather matronly). My friend will tell you to this day that Gina’s best advice was:


It is true that Gina gives suggested schedules that change over time that build all of the above into black and white routines. But mum’s seem to forget that Gina isn’t in the room with them, she isn’t standing over you with a big stick, and she gives guidance on when and how to attempt moving on through the schedules.

She followed them loosely, focusing more on a 7am start and 7pm finish whilst promoting all of the above main points in those 12 hours, and I can honestly say that I cannot remember ever hearing my her son “crying out” or seeming distressed. If he woke in the night and was hungry, she fed him, but he learnt to settle himself quickly because she didn’t indulge in over stimulation after 7pm, in fact she had a no speaking rule after 7pm, and it worked, it really really worked!

So, naturally the first thing my friend bought for me was my own edition of “The Contented Little Baby Book”, she knew I would be open to this and with so much time on my hands before the baby arrives I have even more opportunity to read, digest, impart and impregnate the basic concepts into my moulinex brain.

I won’t be implementing it in a desperate rush like we were before, I can absorb and think about how to adapt our lifestyle to her suggested routines, whilst maintaining the basic concepts. After all, living in Thailand not all of Gina’s suggestions will work for us, for example she suggests going for a walk (if you want to) in the afternoon. Obviously the afternoons are hotter here, so I will probably shift our routine to doing walks to the local market in the morning, and hubby has already changed hisroutine  in preparation for engaging play time at 7am every morning, so that he doesn’t have the pressure of always getting home in Bangkok traffic jams for bed time. At the end of the day I don’t want daddy to run through the door stressed and sweaty from Bangkok traffic, just in time to impart all of that stress onto our baby just as she is winding down. I would much rather watch, and participate in, constructive play time at 7am (I say watch and participate, but what I will be probably doing is frantically showering!).

So yes, I will be waking our baby in the mornings, even if she wants to sleep longer, because quality time with her daddy (and a showered, clean, mummy) will only help to encourage good routines and eventually good sleeping patterns from positive stimulation throughout the day at the right times.

So, my mind is pretty much set, but I remain open and continue to listen to other mums advice…and boy oh boy are other mums happy to give advice – keep it coming ladies as I’m sure I will have some bumpy days and nights ahead, and thank you in advance from the bottom of my heart x